This is the recipe title that proves my husband is a twelve-year-old :P.


*A word about the peppers.  Per the recipe, you can use any type of chili pepper you want from jalapeno to serrano to the Thai brid's eye chili.  If you don't like your food particularly spicy, just remember to split the pepper in half and remove the ribs and seeds.  The easiest way I've found to do that is to use a spoon to scrape them out.  Just remember to either wear gloves while doing this or else wash your hands directly afterwards and do NOT touch your face or eyes.  The pain level is about on par with touching your eyes with Ben-Gay residue on your hands.

Preheat the oven to 425F.  Line a baking pan with parchment paper or spray the pan with cooking spray.  Place the chicken on the pan in a single layer.  Bake for 20-25 minutes, turning the wings or drumettes over halfway through the cooking process.

While the chicken is baking, make the vinaigrette.  Combine the ingredients in a bowl large enough to fit all of the chicken.

When the chicken is finished, toss the wings or drumettes in the vinaigrette to coat.

This was pretty good.  The vinaigrette itself has some tart and sweet flavors and the ginger comes through quite nicely as well.  I didn't have too much spice without the ribs and seeds of the peppers which I tend to cut down on as a general rule since the SU has this thing about seeing through time (thank you, Simpsons) due to the heat quotient of foods thanks to his gastric bypass.  The recipe does suggest adding cilantro which I did, and that upped the heat nicely without taking it into awe-inspiring levels.

The only thing I did differently than the recipe was I tossed the drumettes in the vinaigrette and then put them back in the oven for a few minutes for the sauce to cook slightly and the sugars to carmelize just a bit.  Then I took them out and tossed them in the remaining vinaigrette once more. 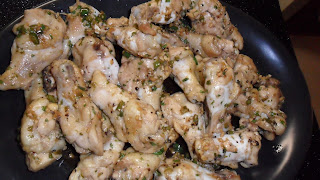 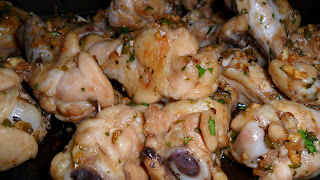 Posted by The Cyber Hermit at 7:24 PM