As I sit here typing this, I can hear tree branches cracking and snapping off under the weight of ice and snow and it sounds like gunshots.  Ah, memories of growing up in SoCal :).

Not much to say about Christmas directly.  The SU and I really don't do anything.  We stopped decorating years ago since it's just us two now.  We don't make any big fancy meal (again, only us two = leftovers for *weeks*) and we don't buy each other any gifts.  (I just re-read that and, wow, we sound like Grinches!  But, really, we just don't see the point...).  Mostly we just hang out and be slovenly.  I spent today doing laundry and deep cleaning my kitchen.  Tomorrow is putting laundry away and cleaning out my pantry.  There is a sale on yarn at my yarn store but...with potentially four-five inches of snow by morning with almost a half-inch of ice underneath, I don't know that I'm all that up for death-defying driving in order to get 20 percent off the yarn I need for my next project!

The SU got drunk again on Friday night. He started off the evening telling me he was sober but didn't want to be.  As the night progressed, the usual signs started showing up.  I confronted him, he admitted he was drunk and I ended up leaving again.  Happy Holidays! :P  This time I stayed away until Sunday morning.  I just didn't want to see him on Saturday and didn't at all feel ready to come home and confront the starting over portion of the cycle again.  To be fair, he did only text me a couple of times during the day and then asked if I would rather be left alone.  My answer to that was yes, and he did leave me be.  I felt better about handling it on Sunday and came home then.

Sometimes it is really hard to have hope.  I told someone that he's like Gollum - holding on to the One True Ring of his anger and there are times I want to scream at him to just climb a ladder and get over himself.  While I know that some of his hurts are genuine, there are also some that I think he hangs on to because he's had them for so long that he wouldn't know what to do without them or what to replace them with.

But I keep digging for that hope because I had numerous years with him sober before he went back to the alcohol and I know who he is and who he can be when he is sober and also when he lets God have free rein.  Sometimes I'm not sure if the guy I married is in there anymore but then he will do or say something that makes me believe he is and I grab on to my hope again.  I definitely couldn't do it on my own, though, and am extremely grateful for the people God has gifted me with to provide support and friendship while the SU and I deal with this.

So, no exciting posts about what I got this year or what the Christmas holiday means to me on a deep, internal level.  Just another day of putting one foot in front of the other.
Posted by The Cyber Hermit at 10:14 PM 2 comments:

Albert Camus and Winston Churchill are my homeboys*

The semester is nearly over - have two more analytical essays to put to bed and then I can call it done.  At this point, I am just ready for the whole thing to be over.  I don't really even care about my grades (witnessed by my incredibly poor synopsis of health care currently staring at me from the other computer screen).

This semester has really sucked on the personal level.  Besides the SU's medical conditions and subsequent additional frequent flyer miles at the hospital, the alcohol abuse has continued and gotten worse.  Periods of sobriety are short.  There have been some really nasty comments flung my way, continued lying , increased drinking and always the cycle of "I'm sorry" and starting over.

After 15 years of sobriety, the downhill slide is painful and frightening to watch.  The ultimate event came two weeks ago when he lied about his sobriety and I ended up in the car with him.  That pretty much tore it as far as I was concerned - now we're talking about my physical safety in addition to emotional safety/health, et cetera.  I went and saw our counselor on my own to talk about that and other boundaries.  I don't know if I've stated it before but divorce is not an option for me.  I jokingly call myself a member of the "one and done" club but I firmly believe in the vows I took and that God put both me and the SU together and we are meant to be together. I know God has his hand in this and I am just hoping that something will happen to get the SU on the road to long-term sobriety before it's too late.

The solution the counselor and I came up with is that if I have concrete proof he is drinking/is drunk, then all I do is just pack some stuff and leave for the night.  I can go to a hotel or a friend's house (if they'll have me) and I stay until I feel like I can return - which doesn't necessarily mean when he sobers up.  It isn't meant to be punitive (hence the not leaving unless I have evidence) but...if he is going to leave me alone by being drunk, then he gets to be left alone when he is drunk.  I cannot watch over him, put him to bed, try to deal with his various medical issues because me being there as his mommy/nanny really doesn't give him any impetus to not drink; someone is always there to clean up after him.  The SU is aware of this new deal.

Last night I got my chance to put this into action.  Oh, this was a hard, hard thing to do.  I came home from my last night of class to find him passed out/asleep in the chair, the oven on and the food inside totally black - pretty much charcoal.  We had a conversation, he lied several times, and then admitted he was drunk.  I had to clamp my mouth shut on what I wanted to say and finally just managed to get out "Okay."  He said, "So you're leaving now."  I told him yes and his response was wow, that was a great reward for being honest.  I paused for a minute and managed to get out that this wasn't the time to talk about it but that we could talk about it later.

I called, got a place to stay and packed a few things.  I came back out and kissed him goodbye and told him I loved him and would see him later.  Then I cried all the way to my friend's house.  And cried when I got there.  And cried some more later on.

I also called my oldest (step)daughter to finally tell her what was going on (the counselor and I had talked about it and I finally decided he was right).  God gave me an excellent daughter in her.  I told her what had been going on and finally finished with why I was where I was last night.  Her response was basically, "All of us kids love you.  We know Dad will have made his own choices.  If something happens to him, no one will blame you at all.  You have to be safe and take care of yourself."  She has some really good insights into her dad and his emotional armor/being vulnerable (or not so much).  She agreed to tell her brother and sister for me since I didn't think I could go through this conversation two more times and then she prayed for me.

This is probably one of, if not the, hardest thing I have ever gone through.  I *know* I am not supposed to divorce him - and not just from a legalistic Biblical view.  I also know that separation is not an option.  It just lets us not deal with each other rather than working on the issue.  My hope and prayer is that with continued counseling and help from AA/his sponsor and the people who love us, the SU will seek after sobriety - and seek after it before this escalates into something more destructive.  My heart hurts for him and that has to be God keeping my heart soft because, wow, I could do bitter and angry like a diva at this point!  But it serves no purpose.  I know the good our marriage and relationship has been and I miss that.  I miss him.

So I keep hanging on like a pitbull and don't let go.  Hopefully all that stuff in James about perseverance is true :).  I'm trying to hold on to God but there are days where I just really can't do anything except say, "Hey, dude.  I got nothin' today.  You know what's going on.  I'm just exhausted."  I've been trying to find some stuff to read that might help me but nothing has really grabbed me yet.  Some days I manage to pray and talk and some days I just sit like a lump during my quiet time.  Writing this has made me feel really exposed but it also feels better to put all this down in some form or fashion, to feel like there is an order to my thoughts and elaborate on the reasons *why* I am hanging on even when people have told me no one would blame me if I did choose to divorce him.

This was from a Ravelry pattern (free download) that I made for Sara as a Christmas present out of Marble yarn.  (I'm not sure of the whole name but each ball was 341 yards and the color is a nicely variegated blue).  It was done on size 13 circular needles and is about six feet long in total and I *still* have some yarn left over.  (I'm going to have to find a project to do with all my remnant stash!).  It alternated rows of purled stitches with rows of knitted stitches, yarnovers, and slipping other stitches.

Anyway, here is Sara with the shawl: 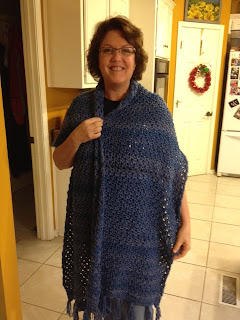 And here is a close-up of the shawl itself: 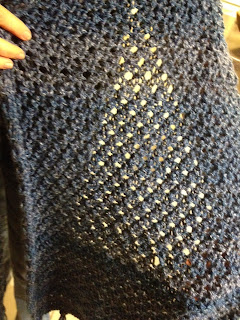 I feel accomplished :).  Now back to my granddaughter's dress...