The (Knitting) Cliffs of Insanity

Either I am heady with the excitement of having completed two projects and conquered purling or else I am simply insane.  Cast your votes now!

This is one of the two projects I am beginning this week: 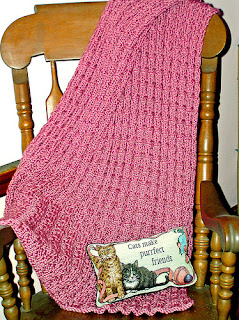 I'm working it in a heather purple color using Vintage Chunky yarn.  It's going to take *EIGHT* skeins of it to finish it.

This is the other project: 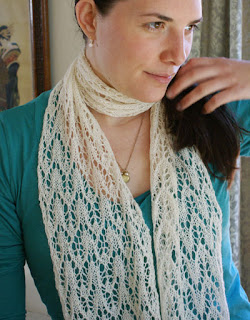 It's going to be done in another, deeper shade of purple (for some reason, purple appealed to me at the yarn store today).

*breathes deeply* I have Knitting for Dummies (book and YouTube channel), Ravelry.com and Knittinghelp. I can do this.
Posted by The Cyber Hermit at 4:10 PM 1 comment:

Email ThisBlogThis!Share to TwitterShare to FacebookShare to Pinterest
Labels: knitting

Well, I *finally* finished the blanket I was working on for Rylie's (my oldest granddaughter) birthday next month: 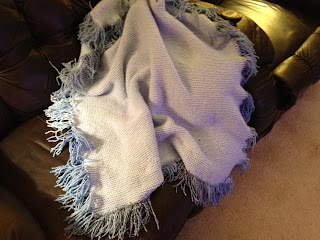 That's the second thing I've ever knitted.  It was 150 stitches for each row and ended up being about 42" long and 35" wide.  I bound a multi-colored skein of yarn and used that for the fringe.  There were one or two missed stitches but, all in all, I'm pretty happy with the way it came out.  We took it to my Kristy's wedding (my oldest daughter) since Jess (youngest daughter and holder of grandchildren) was going to be there with our granddaughter, Emery.  It got use for Emery's nap so I guess that's kind of a seal of approval :).

I'm also wanting to try something more complicated now that I've finally figured out purling.  I kept making unintentional yarnovers until I watched Yarn Store Lady (YSL) again a few weeks ago.  The light bulb moment came when I realized YSL was bringing the working yarn around in front *before* she purled.  Duh! So I have in mind a lace pattern scarf made from silk alpaca and a blanket for Emery that alternates knitting, purling, and slipping...or using the yarn to strangle myself when I go insane from trying this!  It's a tossup :).

Kristy's wedding was really nice.  They were originally going to get married in August but it was becoming a hassle.  They had planned a small wedding but there was apparently some potential drama with people thinking they were invited, wondering why they weren't invited, etc.  So they moved it up to March and basically had family and just a few friends.  God was very awesome in the manner of our Federal tax return so we could afford the plane tickets, rental car and hotel and not have to worry about it, and it was lovely to watch the Spousal Unit give away our "little girl". 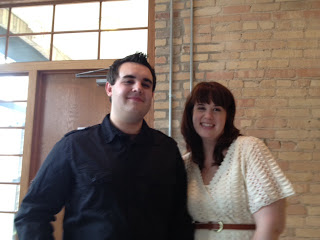 We went up on Friday, came back Sunday night, and Monday was full of seeing old friends.  Last night, though, was the dreaded Research Methods midterm.  Professor X gave very few clues about the content of the midterm other than he expected us to write about 20 pages and that he expected us to fully explain and defend the choices we made in our answers.  I wrote for about 2.5 hours straight.  Here are some of the questions:

My only thought as I left last night was "why did I think a Master's was a good idea again?"  I'm honestly worried about how I did on this exam.  I don't feel like I answered the questions as fully as I should have and it's going to bring down my grade in a bad, ugly way.  I know, realistically, there is nothing that I can do about it now and I wrote down everything I did know and tried to explain and/or defend but...yeah, not happy.

The good part of this week is we got to see some really good friends of ours who, now that we've moved to Arkansas, we don't get to see unless they are coming through the state on their way to Texas.  But, lo and behold, they did and we got to spend some time with John and Jen and their kids - three out of four whom we've known gestationally :).  Aidan (or Monkey) is my special bud and his sister Eleasa (Beanie) loves me too (and I love them).  Samuel, the oldest, had been writing a worship song on the trip and showed it to both Mike and me.  Mike made sure to give him his very best worship leader critique :). 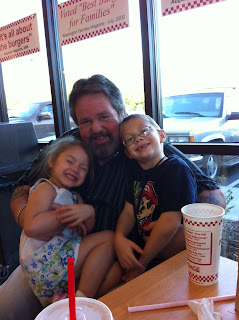 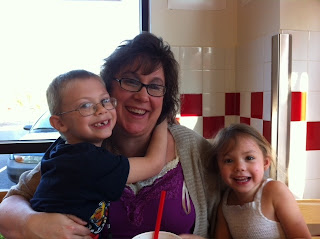 We met them while they had dinner and then agreed to meet them at their hotel pool a little later.  It was when we were getting into the car that I noticed Mike making a face and rolling his eyes.  I told him that I could go to the hotel by myself if he wanted and he said, no, that wasn't it.  Later on, he told me that God had chosen that exact moment to explain why He had told us not to put down roots in Arkansas (e.g., not buy a house, etc).  According to God, it's because we will ultimately be returning to our old stomping grounds to once again to work with John and Jen in their new church at some point.  The reactions of the Spousal Unit and me to this news were largely the same:

'Cause, dang, it's not like I don't have people I love back there (hello, see pictures above) but I *like* where I am now.  I like my town, my apartment, my job, my friends.  If God really wants us to go back, He's going to have to make it quite readily apparent.

(oh man, that's just like throwing down the gauntlet, isn't it?)

The Spousal Unit and me...we're just gonna let that one percolate for a while.
Posted by The Cyber Hermit at 1:07 PM 1 comment:

Things are pretty okay with the Spousal Unit and me most of the time.  The issues we're having concerning his lapse tend to spike at certain times or with certain behaviors.  I do have to give him the benefit of the doubt because (a) he's worth that and (b) I don't want to live in an attitude of mistrust and suspicion for the rest of my marriage.  Doesn't mean that I am not cautious or that I don't search his studio and other hidey-holes, though.  I think the part I hate the most is that I know I have to take his answers as truth to try and extend trust, but yet the immediate (and now ingrained) response is that I *can't* trust him - and I really hate that.  I hate we are back where we started - if not further back - almost two years ago.  It's this weird mental divide between "I want to trust you" and "I can't trust you".  Grace sucks, sometimes.

He's also going back to school this summer/fall which is making him have to look in a lot of places and at a lot of buttons he'd really rather not revisit.  He was the first in his family in a loooong time not to go to college and the first to join the military and the SU took some heat and some disapproval for that, which created an "Eff you, I'll be a self-made man.  I don't have to do things your way" attitude.  He's done very well for himself for a very long time but now it's becoming clear that if he wants to move forward any further, he will have to get some type of piece of paper.  Ergo,  he's applied and I'm guiding him through the application process, testing process, et cetera, and trying to ignore the majority of remarks about how dumb this or that rule is :P.  (Sweetie, if I tell you not to open the sealed transcript?  Just go with it.  If you wanted to see your grades, you should have ordered another one.)

I'm about halfway through *my* classes for the semester and, really, can I be done now?  I spent the weekend assigning ordinal variables to about 500 pages of Excel data and my brain is just FRIED as is my body for that matter.  Even the nonfat hazelnut latte isn't helping :(.  I'm starting to feel sick and I can't afford to do that so I will probably go home and try to sleep for most of the day.  Still, I'm ahead of the game in that I've got my data ready and I've got the majority of my paper at least drafted - lit review, data and methods, and the methodology.  So, go me :).

On the more recreational front, the blanket I am knitting for my oldest granddaughter is almost done.  I'm on the sixth and last skein of yarn.  I went back to the yarn store and got a refresher in adding fringe so I can do that also.  I may need to get someone to remind me how to do the binding to finish off the blanket;however, as I recall, that was a pretty simple process.  I also got a lesson in how to purl and bought some alpaca yarn to work a scarf using knit and purl stitches as a way to reinforce the lesson and practice until I move on to making something bigger using those two stitches.  That will probably be a blanket for my other granddaughter.

Also made some really good food this last week - a roast buttermilk chicken recipe (which I shared with Sara) and a cocoa-rubbed steak with a bacon-whiskey gravy.  The SU really liked the steak :).  I'm also getting a haircut this Friday.  Even though I've already cut off about five inches, I still don't like my hair so I'm looking for something different, something less one-length.

And then it's my oldest daughter's wedding (elopement) on the 24th!
Posted by The Cyber Hermit at 9:16 AM 1 comment: