When you call about my program and I tell you it is a graduate program?  Please not to be getting all huffy with me regarding the requirement of a bachelor's degree.  For, lo, whilst I agree that, indeed, life can seem most unfair at times, the fact I will not make thee a thing called an "exception" due to your (dubious) sparkling personality doth not qualify as "unfair".  Nay.  It is barely a blip on my radar.

When you inquire about a community program that has a link via my program's web page that I do not know about, please not to be disbelieving regarding my statement that I have no knowledge of them as I only work with my program.  However, when I am kind enough to not comment on your affliction of blindness and point out the link contains contact numbers for you to talk to people who, you know, actually work with these community programs, and I suggest you call them?  Prithee not to be badgering me about how come I have not the information within my own brainpan.  The last time I took inventory, I did not determine I was the Fount of All Knowledge.  If you continue to insist that, yea verily, I have abilities beyond my ken, I will be sorely tempted to maketh stuff up and tell it to you as Gospel. 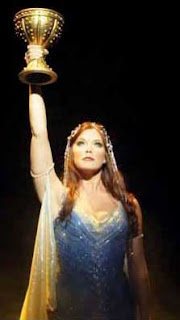 Email ThisBlogThis!Share to TwitterShare to FacebookShare to Pinterest
Labels: school

OK...once again, in no particular order: 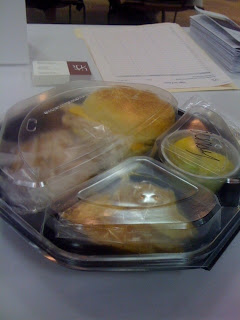 Lunch.  I was part of a Graduate School fair where we put on our bright shiny faces and answered questions about the programs we run.  They were nice enough to feed us :). 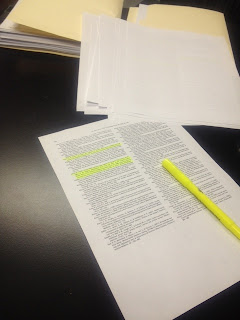 Studying!  I have two projects this semester (one requiring a Powerpoint presentation in addition to the paper itself) so I'm back spending several hours of Saturday and/or Sunday mornings at the local coffee shop as I work to create something out of many stats and journal articles (and try to remember again why I thought this was a good idea!) 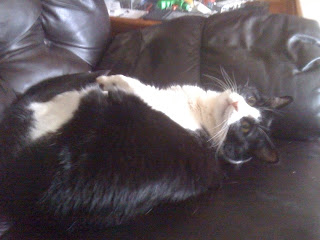 Cat picture!  Gracie was lying in the Spousal Unit's chair and watching me knit.  She doesn't ever go for the yarn.  She just seems to like to watch it move. 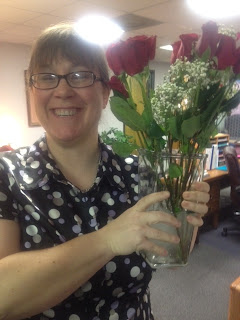 It was my 20th wedding anniversary this week and the SU sent me flowers.  Since we were being dorks with each other on our iPhones, I was going for an especially cheesy grin.
Posted by The Cyber Hermit at 7:32 AM 3 comments:

The State of WTF

(which is actually the initials for my on-line name but, in some ways, also encompasses my life lately...)

I have good intentions of getting more blogging done, taking pictures, etc., but my brain and my general emotional state seem to have me in a state of overall inertia.

First, there is school.  There is always school.  I'm taking two classes this semester for my Master's and I'm kind of freaking out over one of them.  When I took an undergrad Research Methods class, I did well.  I understood the material, I was able to write my paper using the necessary procedures, design my survey, etc.  This time, it seems a LOT more stats-based which is the first thing that is wigging me out.  I have never taken a stats course in my life.  Once I passed the requisite high school and college math, I have not bothered with another math course ever.

Second is the idea we are having a midterm based on the book and the lecture notes.  Now, I read and I study and I listen in class.  But the book itself is so chock-full of vocabulary and examples and the lectures are also very dense.  The midterm itself will consist of one question (one of those questions that is actually made up of several questions and you have to unravel it like you would a ball of yarn) and we have to be able to demonstrate - using the info from the book and the lectures but not having access to them - how we would set up the study, define the variables, what scales we would use, etc.  Pardon me while I do my Kermit the Frog impression again:

I *was* able to piggyback both my projects off each other which helps in that I am at least not researching two entirely different subjects but I'm also seizing about trying to get these journal articles read, follow the research and write a coherent paper for both classes - not to mention create a Powerpoint presentation which will be part of the fifty percent of our final grade for Research Methods.

(The topic I am researching this semester is sexual assault on female military personnel looking specifically at Iraq and Afghanistan active duty and veterans.  I have several years of stats, what each branch of the military has attempted to do re: prevention and education, statistics on end results of prosecuted cases, and if the changes in how the crime can be reported has changed the amount being reported and so on.)

So, you know, add all that in to my regular work day and my brain keeps freaking out over how I'm not going to get done, how I'm so far behind (these projects will be due in May) and just general OMGWTFBBQ!! going on in the back of my head...and all still in Homer Simpson's voice...which is at least entertaining in a weird, twisted way :).

On the home front, there have been some really good things happening.  We filed our state and federal returns and, since we sucked it up so bad last year, we get money back.  Enough to get us to our daughter's wedding this summer (yay!).  We've also gotten some of the shop bills paid off and should have nearly all of them completed by April (yay again!).  However, in the midst of all that...long story short, the Spousal Unit has an issue he has been working on.  I found out about it last January and it was a long road back with regaining trust.  Just last month, I found out he has been letting me think he has been successful in working on this issue but has, in fact, been stumbling regularly.  So now we're full circle back to the trust and some anger again.

I believe he is truly sorry and is working in earnest again.  And I'm finding it...not "easier" but, having been here before, I know more what to expect, I guess?  To that end, I work on being the wife God has called me to be versus the wife I sometimes want to be when the anger comes up again.  However, I'm finding that it is affecting me differently this time and it took me a while to pinpoint it.  I spent a lot of the last year cheerleading and supporting and I just feel like the well is dry at this point both in that arena and my relationship with God.  I'm trying to still spend time each morning with Him before I start work with my reading and some prayer, but I can see where I'm just reading to check the block and my prayers are either very short or I just tell Him "hey, I got nothin'."  I know I need to keep in God's word and presence so that I have the reserves I need to be the helpmeet and to (hopefully) beat back the times when I really just want to verbally eviscerate him (which I can be scarily good at).  Still, I just don't seem to care about keeping my morning "date", so to speak, all that much right now.  It's pro forma rather than because I want to.

Shoot, knitting's about the only thing I enjoy right now because it's mindless and I can just watch my hands do stitch after stitch and I don't have to think - except about keeping the cats away from my working yarn :).  Anyway, I don't mean to be all depressing but I figure if I'm going to have a blog, I need to write about the good as well as the bad.  I know God is here and I know He will help but I'd like to get it back out of the solely intellectual "knowing" and back more into the relationship "knowing", if that makes sense.

A little less Kermit the Frog would be nice...
Posted by The Cyber Hermit at 10:21 AM 2 comments: