I made this on one of those nights when I came home and wondered exactly what the heck I was going to do for dinner. It's not haute cuisine (or hottie cwi-zee-nee as my husband likes to pronounce it), but it's tasty and can be ready fairly quickly with minimal ingredients and minimal mess.

The evening's guests of honor: 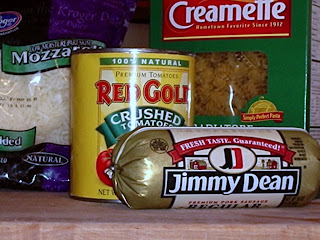 It's one pound of regular sausage, a box of pasta, a 32 oz can of crushed tomatoes and a 2 cup size bag of cheese. I like buying the sausage "plain" as it were and adding my own spices to control both the flavor and the heat rather than buying the "Italian" sausage links. The pasta is whatever will hold the sauce so I will usually go for radiatore or something with ridges, and the cheese is just whatever grabs me. Mostly it's mozzarella or a mix of mozarella and parmesan, but I have made a Mexican version of this with sharp cheddar and sharp cheddar/queso fresco.

Brown the sausage in a pan and add whatever spices follow along with the theme. If I'm making an Italian version, I'll usually throw in some salt, pepper, oregano, and just a touch of cayenne for some added heat. I just season to taste and the heat level my family is comfortable with. If I'm making a Mexican version, I will usually throw in some cumin and some chili powder as well; again, tasting as I go to make sure that nobody will (as Lisa Simpson says) "see through time". 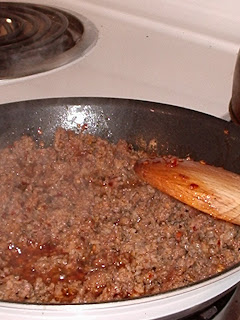 As the sausage is cooking, I also get my pasta water started and my pasta cooking. Once the sausage is all cooked and the spices have been added, open up the can of crushed tomatoes and pour them in. I will sometimes add a few teaspoons of sugar to this to cut the acidity of the tomatoes (the Spousal Unit doesn't do so well with that sometimes). Stir to combine and let heat through. Mmmmmm... 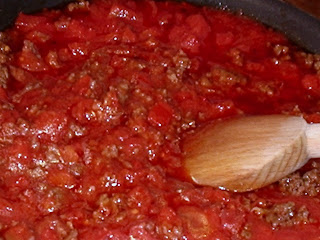 By this time, the pasta should be ready. Go ahead and drain it and either dump it into a bowl or into a 13x9x2 casserole dish already sprayed with Pam. Add the meat/sauce mixture and stir to combine. Now comes my favorite part. Break out the cheese! 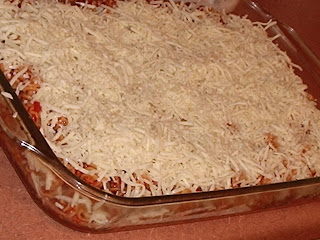 Put it in the oven at 375 degrees for about 20 minutes or so - give or take on whether you like your cheese melty or more brown and crispy on the top with meltiness on the inside. And...voila! Dinner. 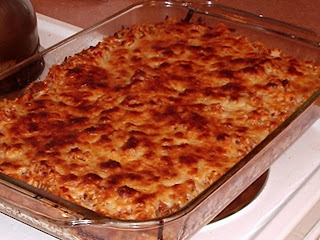 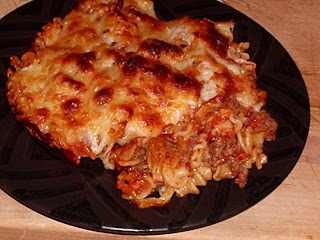 The SU instantly liked this and has requested it nearly weekly ever since. He prefers the Italian over the Mexican but I like both. I've also played with adding veggies to it such as crimini mushrooms or zucchini that I've cubed or cut into small matchsticks. I'll cook the sausage first and then saute the vegetables in the drippings left over before adding the sausage back and then the crushed tomatoes. It adds more "good" filler to the casserole and I can cut down on the pasta used. I've also used ground turkey, but if I do, I try to get at least the 85/15 version so it's not quite so dry as the 90/10 can be.

Plus, you know, there's cheese. You can never go wrong with cheese :).
Posted by The Cyber Hermit at 5:22 PM