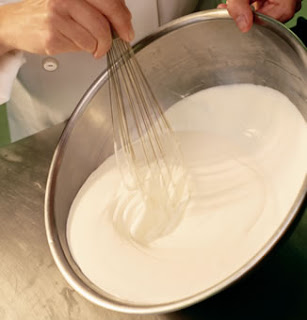 For most of my life, I had avoided cooking or anything resembling actual work in the kitchen of the food preparation variety. I'm not sure but I think it started way back when my dad told my mom that she needed to teach me how to cook because I wasn't ever going to get married unless I could cook. Being the Type B (i.e., quietly rebellious) child that I was, I determined that if cooking was a prerequisite for marriage, then some poor schlub was going to go hungry a lot or become very well known at the drive-thru.

I did manage to get married without a pop quiz into my cooking skills (outmaneuvered you on that one, Dad!). The motto of our marriage was "If music be the food of love, play on" (I married a musician). For the first years of my marriage, I could cook if I had to or felt like it, but they were generally uninspired dishes; easy things like Cornflake Chicken or tacos. Neither of us starved but we didn't exactly set the culinary world on fire.

When we moved to Georgia, the Spousal Unit got smacked around by several health issues - Hello, diabetes! Good day to you, heart problems! - and I started cooking. A lot. As in poring over magazines and recipes, watching the Food Network, and buying ingredients I'd never heard of. Flat-leaf parsley may not be exotic to me now (or to anyone else as a general rule) but back then? Might as well have asked me to go harvest it myself from the Italian outback.

footnote: Yes, I know there isn't an Italian outback. It's a metaphor. Then again, my father might not think so. He also hated that I was an absolute dunce at geography. Really ruined those "friendly" family Trivial Pursuit games.

For several years, I had a sweet relationship with my kitchen. We were BFF. I'd go into there, open some cupboards, pull out some ingredients, smack some pans down and create, baby! Booyah!

Then we moved to Tennessee and I got very involved with training/fighting muay thai and such...and stopped cooking again. The Spousal Unit was also working long hours as well - first for another company and then for himself - and also ended up having gastric bypass surgery. Once again, for a very long time, we went back to subsistence cooking. Meals boiled down to what was in the fridge/freezer that could be easily thawed/thrown together/broiled/what have you.

Long story short, it's now almost five years later. I've cooked enough to keep my hand in and my skills fairly sharp, but I haven't had the relationship with my kitchen that I had in Georgia and I've missed it. The kitchen had become my Zen, my relaxation, a place to sip a drink and pore over the potentials of a new or previously made recipe. Do I follow the instructions exactly? Do I want to change it up a bit? What if I do X instead of Y? I wonder how that would come out if I...well, you get the idea.

I find that I miss it. A lot. So I've made some changes. I'm not going to be training for a while and that gets me home several hours earlier in the day versus the oh-crap-it's-almost-8p.m.-what-do-I-do-for-food routine we've been locked into for many, many months. I've refreshed my cooking bookmarks, dusted off my cookbooks, pulled out my recipe folders and re-installed my cooking software. I hope to detail some of what I make in this blog, but my bigger hope to reconnect with that quietly creative part of me that's been silent for a while and revive the pleasure and satisfaction that came from taking diverse ingredients and making something good from them.

Let the experimentation begin :).
Posted by The Cyber Hermit at 9:37 AM