I'm not entirely sure how I got my husband to agree to a cat - much less two. Maybe I was especially cute and winsome that day...or maybe he was tired of hearing me bang on about it. Our neighbors' cat was the feline version of Ma Duggar and so our neighbors were constantly putting up signs about cats being free to good homes. I'd had several pet cats while growing up and missed them. My husband, on the other hand, had grown up in a pet-free household and, up to that point, seemed to have been determined to keep it that way.

But there we were...summer of 2001...in our neighbors house, looking at the kitten I'd chosen and named Munchkin since she was the runt of the litter. While we were sitting in the living room with Munchkin, her sister (then known as "Ziggy") came gamboling out as fast as her six-week-old legs would carry her like she scented chum in the water; or, more likely, a potential soft touch. She ran up the Spousal Unit's leg, turned around and planted all four legs firmly on his thigh. Her tail quivering like some kind of furry flag, it was as though she was announcing "I claim this one."

Eight years later, we have this: 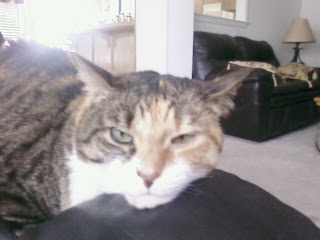 That would be Munchkin - all 15 pounds of her - giving me her usual barely patient glare. I'm firmly convinced that Munchkin means "Soul of Ennui" in some language. However, my husband would swear it means Bitch Kitty. I'd never hear a cat complain until we got her. It was bizarre. Instead of a sweetly questioning meow or the occasional pitiful vocalization, we are regaled with complaints on a regular basis. God forbid the cat food in her dish isn't up to her freshness standards because you will hear about her displeasure. Even if it's three in the morning, you will hear from Her Majesty.

(It's at that point the Spousal Unit and I play a half-awake game of Rock/Scissors/Paper to find out who has to get up and kick the cat's ass this time.) 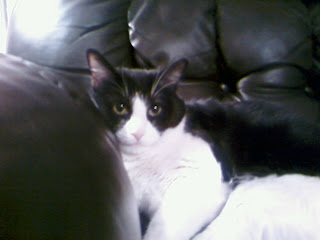 Curious Grace (the artist formerly known as "Ziggy") is on the right. That would be her come hither stare, which is meant for my husband and my husband only. To her, I am the Other Woman. We (my husband and I) sit and watch TV at night. We hold hands...we snuggle. Gracie can't stand this. She is firmly convinced that if she can just muscle in between us, she can show my husband the Error of His Ways and Their Love Will Be. This usually involves one of two tactics:

1. She will sit on the floor in front of our recliners and stare at us. We're not just talking your average kitty notation of the goings-on. Oh no. This cat does. not. blink. She's worse than Max Von Sydow in that movie about Jesus they show every Easter. As she sits there, unblinking, you can clearly see a thought bubble forming above her head as she stares at me. There is one word in that thought bubble and it is "Bitch".

2. The Death Ray Stare (tm) apparently not working fast enough for her, Gracie's next tactic is to play Stealth Kitty. I guess in her world she's slyer than James Bond and more invisible than the Stealth Raptor built by the Chief's crew on BSG. However, her version of stealth leaves something to be desired. First, she will jump up on the end table by my recliner. From there, she will leap to the top of my recliner while I'm sitting in it. Because nobody is going to notice another 15 pounds of cat essentially leaping on to their head. She'll lay up there for a while and then eeeeeeeever so slowly start inching down the recliner towards our joined hands so she can leap over them and try to lay on the Spousal Unit's chest. (At which point the Spousal Unit generally shoves her off him with the verbal notation that I was here first and there is no contest. Awwwww, my hero :)).

Some days, I just gotta wonder what I was thinking.

Posted by The Cyber Hermit at 5:49 PM

Email ThisBlogThis!Share to TwitterShare to FacebookShare to Pinterest
Labels: cats