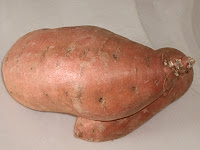 I love sweet potatoes. But I rarely find recipes that aren't full of brown sugar this, marshmallow fluff that and just...eeeuw. Too much sweetness. It's like a pumpkin pie casserole on steroids and my tastes tend to run more towards mixing the natural sweetness of the potato with something a little more savory. Hence today's experiment.

The jumping off point was ourbestbites.com. Since I hadn't been cooking regularly for a while, I wanted to get some ideas as to time and temperature. First I peeled the potatoes and cut them in half, then made multiple slices from the halfs before finally making matchstick pieces (or as close as I could) from them: 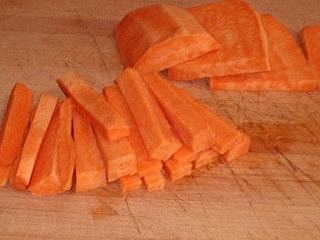 Once they were cut, I put them in a bowl, poured about two to three tablespoons of olive oil over them and tossed them until they were coated. The spices in order of appearance were salt, pepper and cumin - probably about two teaspoons of salt and pepper and close to a teaspoon of cumin. You can't really tell it's cumin in the picture but it is (still figuring out the camera options): 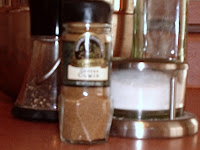 After mixing it all up with my hands to make sure everything was distributed, I put them potato pieces on a baking sheet sprayed with Pam: 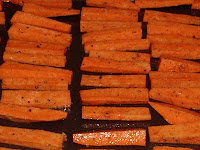 I started the temperature at 425 degrees and let them cook, checking on them on occasion to make sure nothing was, you know, burning uncontrollably. At the 20 minute mark, I went to flip them over and noticed there was a good deal of browning already taking place - perhaps a bit too much. I flipped the fries over and lowered the temperature to 400 degrees to finish the cooking process, letting them go for about another 15 minutes. The end result? 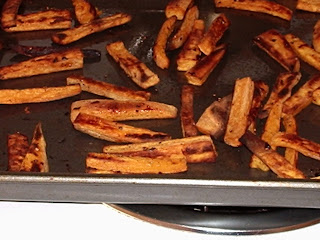 They were more...roasted than anything else. I liked the taste and the consistency - some light crunchiness/firmness on the outside and a soft inside, but they weren't really what I was looking for in terms of being a sweet potato fry. I would definitely up the ante on the spices. More salt, more pepper and look at some dried herbs or even some parmesan. I might also experiment with cooking them at slightly different temperatures by going a little lower and slower with one batch and then upping the oven temp with another batch to see how they compare. Overall, though, they made a pretty good accompaniment to a broiled steak and a green salad.
Posted by The Cyber Hermit at 9:19 PM