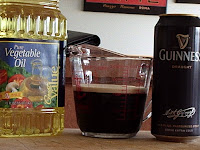 I used to bake a lot when I was younger but I'd moved out of the realm of desserts and much more heavily into dinner-type foods and more savory dishes (e.g. appetizers) before my last break from cooking. However, I still like to bake and when I saw this recipe, I knew I had to give it a try. Chocolate and beer! What's not to like? 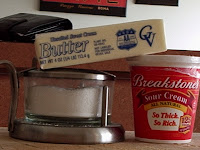 1 cup stout (such as Guinness) 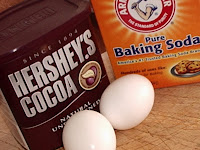 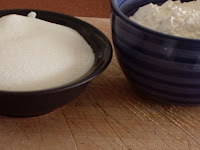 1. Melt the butter in a sauce pan, remove from heat and let cool a bit.

2. Mix in the stout and cocoa powder.

3. Mix the flour, sugar, baking soda and salt in a large bowl.

4. Mix the eggs and sour cream in another large bowl.

5. Mix the stout mixture into the egg mixture.

6. Mix the dry ingredients into the wet.

7. Pour the batter into one or two greased and parchment lined circular cake pan(s).

**The batter itself is fairly loose. It's not a particularly thick batter like you might think considering the quantity of dry ingredients. I found it worked better if I popped open the Guinness, poured approximately half a cup into the measuring cup and then waited for the head to subside a bit before pouring the rest. 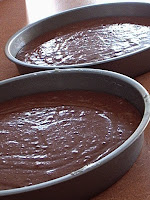 Since I had made cakes before in these particular pans and had not used parchment paper when it was called for (since the cakes had turned out fine), I didn't this time, either. When I make this cake again, however, I will definitely use the parchment. The cake itself is moist. Very moist. And it sticks to the bottom of even a non-stick, greased cake pan. I lost a little bit of the first cake to the pan and the other layer, even after cooling, was still somewhat firmly attached to the bottom of its pan and I had to coax it out. Heeeere, cakey-cakey. Good cakey-cakey. Who's a good cake now?

Yeah, okay. So I didn't just put Guinness in the cake! 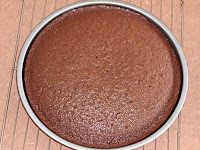 **On Closet Cooking, the picture is of a single layer cake. I, being me, which means not wont to entirely follow directions sometimes, decided I would make this a two-layer cake and doubled the icing recipe. Still not enough. There was about 1/4 to 1/3rd of the cake in back that was not iced on the outside (there was icing in between the layers, though). That, combined with an almost overly moist cake that added crumbs to my icing was a bit...annoying, shall we say? Still, I managed to get most of it iced and put it in the fridge to set up a bit. 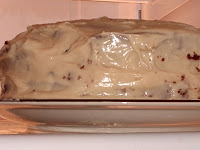 Finished product? Duuuuuuuuude. Even with setting up in the fridge (which can sometimes dry cakes out), this cake was still soft and spongy. You could definitely taste the Guinness. Combined with the unsweetened cocoa, it made for a more earthy taste than I might have thought, but it was leavened by the sweetness of the icing. The confectioner's sugar and Bailey's cut the slight bitterness of the Guinness and the cocoa and stout helped make not the icing not so sweet, which it might have been with a lighter cake both texturally and taste-wise. I will definitely be making this again. 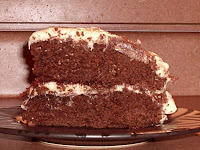 Posted by The Cyber Hermit at 6:24 PM