I love Mexican food - the more authentic the better. It's sommetimes hard to find the good stuff but we've managed to scope out some of the more "local" joints versus the ones that serve more Americanized versions of Mexican food. In between, I work on increasing my own repetoire. Something I hadn't really tried to this point was tortillas. For some reason, the making of them reminds me of my one true nemesis of the cooking world - pie crust. I cannot make a decent pie crust to save my life. I think tortillas seem similar because there is resting and rolling and such involved - similar to pie crust. But then I saw this recipe and the idea of tortilla-making suddenly seemed, well, simple. The only real difference I found was the use of shortening versus lard. 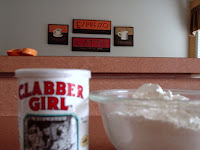 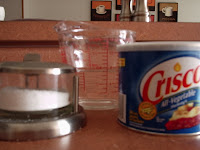 1. Whisk together the flour, salt and baking powder.

2. Cut in the shortening until mixture resembles course meal.

3. Add warm water a little at a time, until mixture forms a soft dough without being sticky.

**Here is where you want to be careful. Don't just pour water in thinking all that flour will absorb it. Keep adding slowly and then knead the forming dough until all the water is absorbed before adding more. It's kind of like making risotto. As the liquid is absorbed, you add more. Same idea here. If you do add a little too much, keep working the dough gently. It may seem a little sticky at first but it will largely disappear with some patient kneading.

4. Knead until smooth and elastic. Roll into 8 equal size balls and cover with plastic wrap. Let rest for 30 minutes. 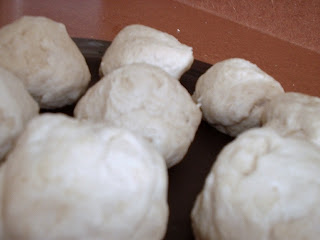 5. Roll each ball out on a lightly floured surface until very thin and about 10" in diameter. Layer them between sheets of plastic wrap and let rest for 10-15 more minutes (or until you are ready to cook them). 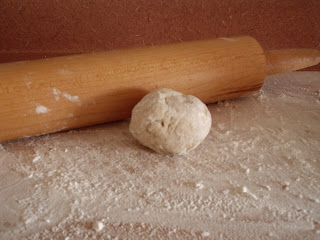 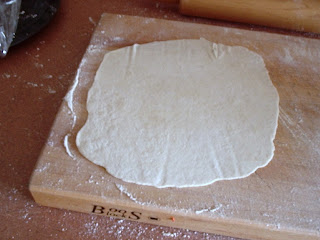 6. Place in a dry (no oil please) non-stick frying pan over med-high heat for about 1 minute on each side. You know its read to flip when it starts to puff up a bit.

7. Wrap with a tea towel while you are cooking the rest, so they don't dry out. Serve warm. 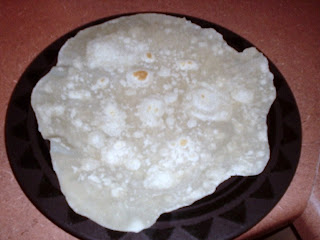 These were wonderful. They were pliable enough to roll into chimichangas with a nice, chewy texture. They also were good as soft tacos or just warm out of the pan with some butter or some butter/cinnamon sugar.

But since we're talking about chimichangas here, we'll get to that part next :).
Posted by The Cyber Hermit at 4:30 PM