Gimpy the Eighth Dwarf checking in 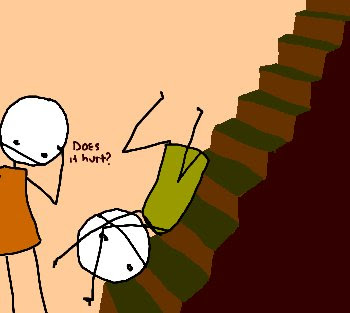 Once again, my klutzy side has decided to share itself with the world. Bleah.

When I was training and fighting, getting injured was just part of the deal. Bruises, bloody noses, black eyes...all part of the plan. The credo in the gym was the bigger the bruise (or other injury), the sexier it was. (You should see my Self-Portrait of Hematoma. Rooooowwwwrrrr!!).

One of the things I did while cutting weight was to ruck. In other words, I took an Army pack, shoved two 20-lb bags of kitty litter into it, strapped that puppy on and hiked 10-12 miles while wearing layers of workout clothes and sweats. This occasioned comments ranging from "hardcore" to "My god, I always knew you were insane."

On one of these walks, I had barely gotten started when I tried to step to the side of the road, misbalanced and fell. Hard. Trust me when I say that 40 pounds of kitty litter increases your downward velocity like a mofo. However, I couldn't just go straight down. No. That would be too easy. Instead, I rolled my left ankle over so far that the ankle bone met the pavement before the rest of me.

Sitting on the ground, multiple thoughts ran through my head, but they all centered around a few key points: (1) Owwwwwwww!!!!! (2) I'm tough. I'm a fighter. I can take this. Pain is weakness leaving the body. (3) Owwwww!!!!!!...with a few swear words thrown in. (4) Pain is weakness - dude, this hurts! (5) Swear some more. Finally dragging my thoughts out of their cyclical nature, I used my cell phone to call the Spousal Unit and ask for a ride home.

Which brings us to now; almost a year later. I've had my fight and retired due to a long-term back injury, but I like to try and keep somewhat active and fit. Thus, I run/walk quite a few miles each week. On Thursday, I wasn't looking forward to the treadmill and thought I'd go for a walk/run for about five miles; walk some of it and then do sprints/cooldowns on the way back. Easy. Done it a hundred times before. It'll be a nice change of pace.

Yeah. Sometimes I should just stick with the plan.

I made it 2.5 miles out and turned around for the home stretch. I've got my track pants on, black sleeveless top, my old Navy cap...feelin' good, feelin' sexy, feelin' oh-so-very good. Which, looking back, really should have been my first clue something was about to go wrong. The universe likes to give me the middle finger at times like these.

I'd gone about three miles when suddenly...cue the ankle totally collapsing again and I go down (coincidentally, about a mile from the first incident). Suddenly, I'm sprawled over a busy intersection at a time approaching rush hour for this town. And did I mention I'm bleeding? That sleeveless top that I was feeling oh-so-sexy-and-good in? Didn't exactly save me from the marriage of asphalt and skin.

I managed to roll myself out of the road much like I imagine a salmon flops around when it's trying to hurl itself upstream and get upright. Running is out of the question. Walking normally may happen at some point but not before the general population of my town that travels this road daily around this time will get to see me limping like Igor trailing after Dr. Frankenstein. There was even an "M" word coming out of my mouth. It just wasn't "Master".

I've got road rash, various scrapes and small divots all down my left arm (but the tat is fine!). Also, my ankle once again looks like it's swallowed a tennis ball and I'm trying to find shoes that I can wear to work that allow me to wear an ankle brace underneath. I tried treadmilling yesterday and got about a mile before I said to myself, "Self, a strong work ethic is fine; admirable, even. Gritting your teeth while you injure yourself further is something the natives refer to as 'stupid'. Perhaps we should stop this for now."

"Does the universe need to flip you off again?"

Excuse me. My ice pack is calling.
Posted by The Cyber Hermit at 6:46 AM