So, to briefly recap...first we made the tortillas (which turned out wonderfully) and now we're on to the filling for the chimichangas. This recipe also had the option of adding refried beans to the chimichanga by spreading them on the tortilla before adding the chicken mixture but I chose to forgo that step. 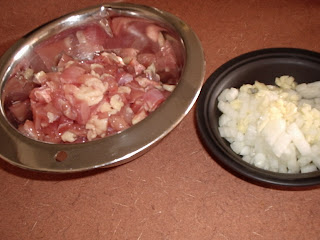 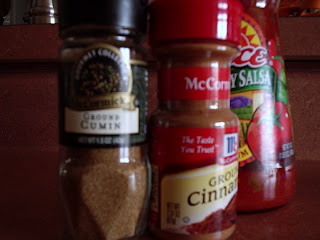 1. Saute onion and garlic in oil. Stirl in salsa, spices, chicken and salt. Cook until heated through. 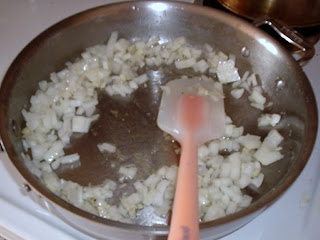 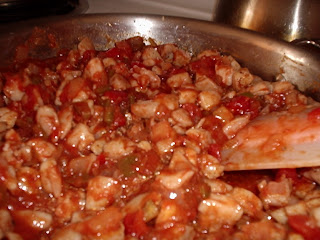 2. If using, spread about 2 tbsp of refried beans on each tortilla then add about 1/2 cup of the chicken mixture. Fold like a burrito and secure with a toothpick or metal skewer. 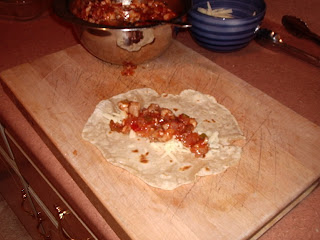 3. Spray all sides with cooking spray and bake at 400F for 20 minutes (until golden brown) OR fry in a small amount of olive oil until brown on both sides. 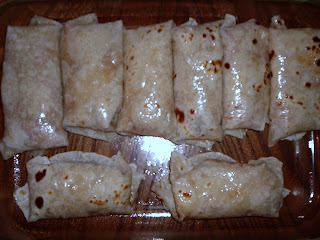 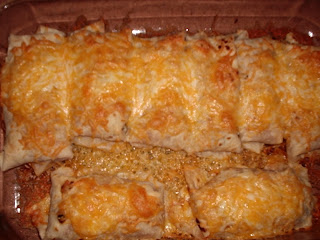 As far as the folding went, I found it worked best if I laid the chicken filling down a line in the middle like the picture above, leaving some room around the edges. I took the top part of the tortilla and folded it over the chicken like I was starting to roll a cigar. Then, I folded the sides in towards the middle to create the beginnings of a tube shape. Then I folded the "tube" over.

(And how many times can I say "folded" in one paragrah?)

I didn't really need the toothpicks or any kind of skewer. As long as the tortillas aren't overstuffed, the mixture won't come out the sides or anything like that and the edges all meet, so there is a solid seam all the way around the chimichanga. I also chose to bake them in the oven rather than deep frying them; personal preference :).

The cinnamon may sound kind of odd but go with it. It will smell almost sweet - like baking sweet - when you're heating the chimichanga filling or they are cooking in the oven. When you're eating them, the spice translates into heat more than sweet. It adds another layer to whatever salsa you may have used and feels warm on the back of your tongue.

These were very tasty and kept well over the two-three days we ate them as leftovers.
Posted by The Cyber Hermit at 5:29 PM