First off, the extraordinarily good : 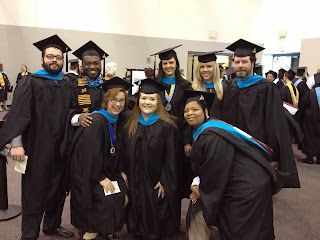 I am done with my Master's degree.  Done, done, done!  Final GPA is 3.9 and change.  (I'm the one on the left in the first row, BTW).  This is most of our Capstone group posing before we walked.  I now get to come home every night instead of having to go to class from 6pm-9pm two nights a week :).

There was some slight sadness in two areas.  One was my dad.  He died in 2007 the semester before I received my BS.  He had always wanted me to go back to school and was so excited that I had.  I missed him being there Saturday.

The other was my mom.  She made it out to the ceremony from SoCal but this will probably be the last trip she makes.  She was recently diagnosed with cortical atrophy which is a type of dementia.  Basically, her brain is shrinking and parts of it are dying.  I had noticed a definite change in her ability to use and retain language before (talking to her on the phone) but it was hard to see the physical changes that have taken over as well.  She has issues with balance and was very frail and easily fatigued.  She stares off into space because she forgets what she is saying.  I took her to Target at one point on Friday per her request.  As we were going down an aisle, she looked at me and asked, "Where are we?"  It was all I could do not to tear up and instead just remind her we were in Target to pick up the things she had asked for.  From what I can tell, she had a good weekend, though, and that is what was most important.

As far as the other thing that's been going on...still married.

I have spent a lot of time over this question and what it basically boils down to is that God is still telling me to stay.  I have had my moments of "Really?  I mean, really?" but that is the gist of it.  As I prayed and talked with God about it, He (as usual) dropped in some teaching moments.  He seems to really like using Brennan Manning's books for that.

I'm currently reading "The Importance of Being Foolish:  How to Think Like Jesus".  I had already had a lesson in Brennan's concept of "nowhere" equaling "now/here" - being present in the moment and not looking back to yesterday or worrying about tomorrow.  Taking that concept, I began asking God to help me with what I needed today.  Sometimes I had specific things I would ask for - the ability to love my husband, to not sit in class and assume he would be blind drunk when I got home and spend all class time stewing about it.  I'd ask for things for my husband for that day.  Sometimes I'd just say, 'Hey, I don't know what to ask for with this day.  You know what I need.  Can you  help me out here?"

Anyway, after the Appointment from Hell, the first thing God hit me with is "security" - specifically, where am I seeking my security?  Answer:  my security was becoming dependent on the SU's state of sobriety each day.  Can't do that.  My security has to come from God and nothing else.  He is the constant and replacing him with something else is only going to cause disappointment.  Manning talks about authentic faith and how it can't be separated from a readiness to act on God's word.  Basically if I have faith - honestly have active, present faith - I can't NOT do what God asks me to do when he asks me to do it.  In this case, stay married and love my husband.  Sure, I can say no because, after all, we have free will.  But then my faith is not active and authentic because I am not acting on God's word in the places and with the people he asks me to.  In all those situations, God MUST be my security.  Not the SU's sobriety, not whether he (and/or I) had a good day or not or anything else.  It has to be God.

In his book, The Reason for God, Timothy Keller says "Religion is not just a temporary thing that helped us adapt to our environment.  Rather it is a permanent and central aspect of the human condition."  Yeah...and one I'm finding needs to be exercised daily...hourly...second by second sometimes.

The other thing God showed me was something that really caused me to start looking at the Spousal Unit in a different way.  Manning is talking about Jesus' compassion and he first brings up the story of the woman caught in adultery, pointing out that she was not given a list of things to complete, she wasn't asked to say she was sorry, et cetera.  Jesus simply told her to go and sin no more (and we don't even know if she did that!).

He follows that with a quote from Marc Oraison:  "To be loved is to be looked at in such a manner that the reality of recognition is disclosed" and then discusses Peter's betrayal of Jesus.  Where I stopped dead was where Manning points out that Jesus watches Peter doing this and quotes the verse that says after the third denial "the Lord turned and looked straight at Peter (Luke 22:61).  Manning goes on to say:

"In that look, the reality of recognition is disclosed.  Peter knows that no one has ever loved him as Jesus does.  The man whom he has confessed as the Christ, the Son of the living God, looks into his eyes, sees the transparent terror there, watches him act out the dreadful drama of his security addiction, and loves him."  (emphasis mine)

I realized reading that how I have not been looking at my husband and recognizing him - the person Jesus sees.  I have been seeing an alcoholic who needs to be changed.  Who needs Jesus, sure, but more needs to be changed into what works for me.  That isn't right.  I have been concentrating on the behaviors I don't want and ignoring the person.  I have ignored my husband's "transparent terror" as he plays out his own addictions.  I have seen him as obstinant and selfish - not afraid.  Not damaged.  Not struggling with hurts and fears that go back decades.  I have wanted my husband back...but in a form that is pleasing to me and haven't really checked with God to say, hey, help me support what you want him to be.  Help me to see him and to let him know he is loved and accepted with all his faults and issues.

"To be compassionate is to understand the conflicts other people have created in themselves without getting caught up in their poignant drama; you realize your compassion will be most effective if you stay centered in loving acceptance." - Manning

I really kind of missed the acceptance part, I think.  To truly love my husband, I have to accept him for who he is NOW and not what I want him to be/think he should be.  He may never be what I think he should be or will be entirely comfortable with but that isn't really the point.  I need to learn to love him and accept him the same way Jesus did Peter so that the Spousal Unit can have a clearer view, a clearer way to Jesus.  Doesn't mean I'm not going to still have really bad days probably but that goes back to where I find my security.