I only have one picture this week and it's a repeat of last week:

Yup.  We ended up here AGAIN.  He was resting over the weekend, played in church Sunday against my better judgment, and then kept telling me how tired he was on the ride home.  He called me at work on Monday and told me he was having the same symptoms again and we needed to go to the ER.  So I took him there, he was re-admitted and had another stent put in on Tuesday.  This makes six in all (collect the set!).  He is back home and resting again.  Had one bad low blood pressure episode where he literally FELL ON HIS FACE but he seems to be doing much better now.  Ever seen a 275 lb man drop like a stone?  That'll get your heart rate going...

(He had the first two stents in 2000 and 2002 on our anniversary.  Now, it's my birthday.  I gave him the hairy eyeball and told him if there was a message in there, I'd really just prefer if he said it rather than trying to make me guess through charades :P.  Seriously, dude, let me teach you how to knit or something instead, okay?)

Now that we are hopefully past the medical version of Groundhog Day, I'm back at work and concentrating on school assignments.  I will hopefully be able to take more pictures and, you know, COMMENT on other people's pics since y'all have been kind enough to comment on mine.  Ah, normality (or as close as I can get)!  How I crave thee!

Oh...and proof that Munchkin is still alive despite dropping the SU's Bluetooth into the kitty water bowl last week: 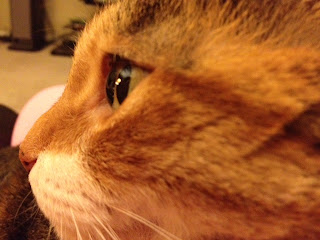