So wrong...and yet so funny

So yesterday there was a news story about a guy who took his dead cat and turned it into a helicopter.  Seriously.  The cat was run over by a car and his owner decided the "ultimate tribute" would be to stuff him and transform him into a helicopter: 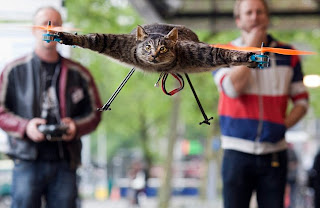 So...yeah.  Now, for any of you that watch "The Big Bang Theory", there is a song that Sheldon wants sung to him in order to soothe his poor, genius brow.  That song is called "Soft Kitty" and goes:

My husband has just forwarded me the Helo-cat version:

Don't mind me.  I'll be over here crawling into this handbasket...
Posted by The Cyber Hermit at 11:00 AM