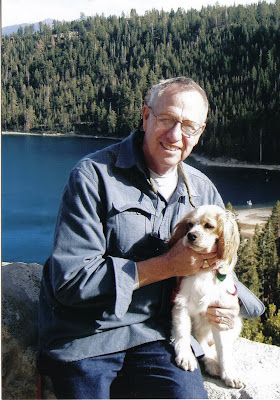 This is probably my favorite picture of my Dad. He's got his dog who adores him (and he adores her) and he's on one of his many motorhome trips.

He wasn't a perfect man by any stretch of the imagination. He was always ready for play sometimes to the detriment of work. He kept some secrets that have those he left behind still puzzled two years later. But he loved us. That was never in doubt.

Two years on and the most immediate, sharp pain of his death has muted but looking at the picture still brings tears to my eyes and I have to clear my throat before I can pick up the phone when it rings at my desk. When death is sudden, it's almost like someone has pressed "pause" on your relationship with that person. You keep waiting to finish; finish that conversation you started, the phone call...something to create some type of closure that you can use to mark it as "the end". Doesn't come, though, and you're left in some kind of holding pattern. There are times I call my parents' house just to hear his voice on the answering machine. I still expect him to call me for my birthday, and the first time I addressed a package solely to my mother felt alien and just plain wrong to me.

We've all worked on picking up the pieces. My mother has made great strides in some areas, yet remains (as I've said) aggressively passive in other areas of her life. I finally finished college and marched through the line to get my diploma while holding the above picture in my hands instead of having him watching from the audience. My brother has become a sort of financial advisor to my mother and supplies visits from the nephews. His favorite granddaughter got married to the young man he liked so much. The first great-grandchild arrived this year.

I call her every night as I have since the day he died and talk to her for however long she wants. Some times it's only a few minutes and other times it can be an hour or more. We talk about what she did that day, what she's watching on TV, church and, of course, about my dad; especially around this time. She wants to be with him and I remind her that she will be. She wants to know when and cries about why can't it be now and I have to tell her I don't know why, trying to reassure her in all my imperfect, linear understanding of God and his existence and plans outside time and space.

When I spoke at my dad's memorial service, the thing I kept coming back to was his gift of hospitality, his generosity of heart. Those were the memories people told me about as I was writing my eulogy and those are the memories spoken of when I run into friends of his these days. As far as legacies go, I think it's a good one when you're remembered with smiles and laughter.

Tonight I will press "play" for a little while. I will sit out on the back porch with a drink and tell him how Mom is doing and she will make that trip to Alaska, how his grandson thought he'd found the woman of his dreams, how his great-granddaughter is almost four months old, and how I love him and miss him.

Email ThisBlogThis!Share to TwitterShare to FacebookShare to Pinterest
Labels: dad